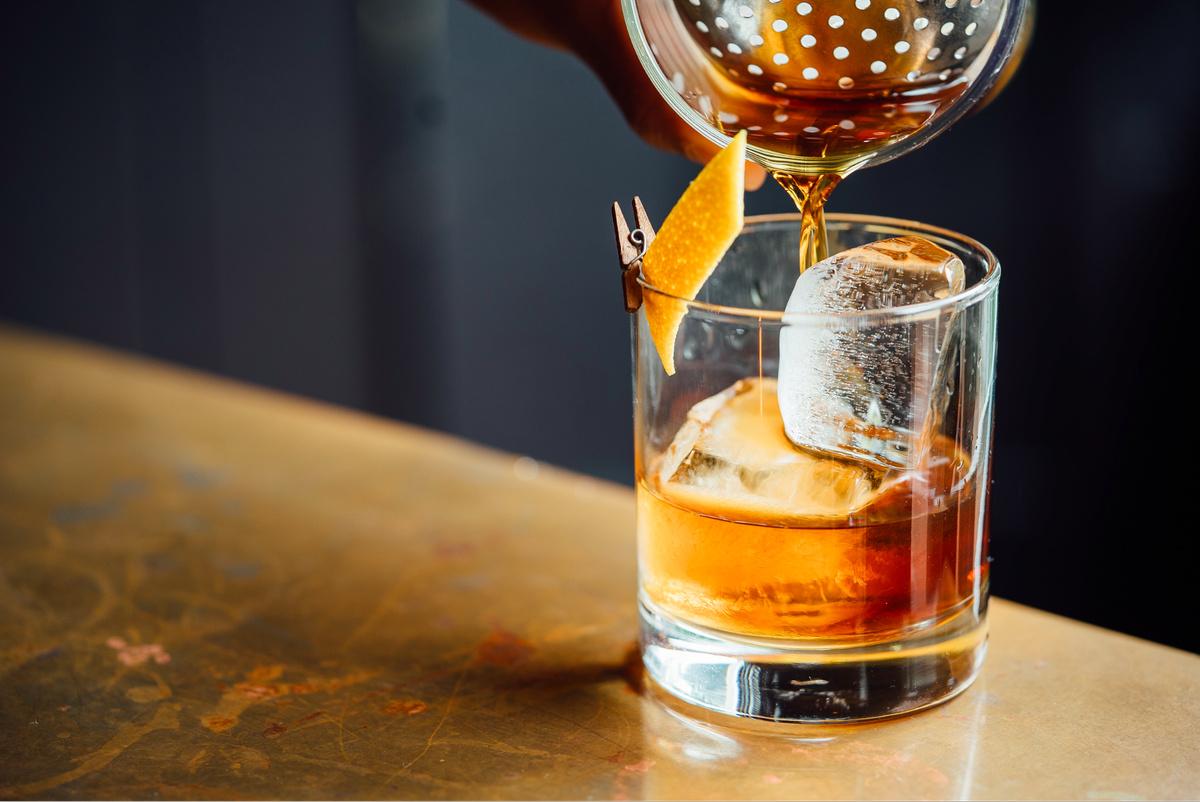 The cocktail is arguably the greatest of America’s early cultural inventions.

The martini, cosmopolitan and, long island iced tea are not just nice ways to get a buzz—they represent the beginning of an American aesthetic. The cocktail historian David Wondrich writes “that [a] facility with mixing drink was the first legitimate culinary art, and the first uniquely American cultural product to catch the world’s imagination.”

Today, most drinkers are unaware of their cocktail’s provenance. We asked dozens of patrons of the San Francisco cocktail bar Rye when and where they thought their old fashioned or manhattan was invented. “In Italy?” one young man guessed. “I’ve never really thought about it,” said a young woman drinking a martini. “Definitely not the U.S. Maybe in the 1500s? Probably in England?”

These tipplers were stunned to find out that their drink was developed in the United States in the 19th Century. While certain mixed drinks and alcoholic punches were made in Europe prior to the 20th Century, the modern cocktail first appeared in New England and New York.

The manhattan, martini, old fashioned, whisky sour, and mint julep are as American as jazz and the cheeseburger, and they spread internationally much more quickly. By the early 20th Century, bars across the world were serving these cocktails and calling them “American drinks”.

After a period of stagnation in the latter half of the 20th Century, cocktails are in high renaissance. Whereas twenty years ago, a place that specialized in craft cocktails was a challenge to find, today, they are ubiquitous in America’s large cities. In the last ten years, U.S. liquor sales increased by 40%—more than any other type of alcohol—and people are not just drinking it straight.

San Francisco’s Rye, which opened in 2006, was among the first bars in the San Francisco Bay Area to offer original takes on classics.

To help us understand the contemporary cocktail scene, the good people at Rye agreed to share a night of their sales data, and we interviewed many of their customers that same evening. We learned that people really do go to cocktail bars for the cocktails—and that the cocktail scene mixes a dash of globalization with a heap of nostalgia.

Do people who go to cocktail bars actually order cocktails? Although the front page of Rye’s menu highlights its mixed drinks, customers can purchase shots, beer, or wine. We wondered whether people go to places like Rye for the veneer of sophistication, handsome bartenders, and fashionable scene—yet order like they’re at your average dive.

When Rye gave us their sales data for Friday, October 14, we examined just how many of the 681 drinks orders were cocktails. As it turns out, people are really there to get a good mixed drink.

Just over 52% of the drinks ordered that evening were cocktails. The other 48% was mostly straight spirits, highballs, and beer. The category “straight spirits/highballs” includes shots of liquor, liquors on the rocks, and liquor mixed with a soda or tonic. (The most popular was a shot of Jameson—an order that became increasingly common as the night wore on.)

A “highball” is the term mixologists use for a combination of a liquor with a mixer—like a “rum and coke” or “gin and tonic”. Rye’s sales data does not distinguish between a “rum and coke” and a shot of rum, so these types of drinks are grouped together with straight spirits in our chart.

Perhaps you thought highballs, like a “jack and coke”, counted as cocktails? The question of what qualifies as a cocktail has a complex history.

In 1806, a curious reader of the Hudson, New York, newspaper the Balance and Columbian Repository asked the paper to explain this new drink he was hearing about: the “cocktail.”

The paper’s editor, in the earliest known definition of the drink, wrote, “[the] Cocktail is a stimulating liquor, composed of spirits of any kind, sugar, water and bitters…” At the time, the drink was hailed more for its medicinal qualities than its taste.

This definition is now outdated. A cosmopolitan, which contains no bitters, is clearly a cocktail. Perhaps a better definition is found in the Wikipedia entry for cocktail: “…cocktail may mean any beverage that contains three or more ingredients if at least one of those ingredients is alcohol.”

No definition seems to be perfect, though, as one of the most famous of cocktails, the martini, contains just two liquid ingredients: gin and vermouth. Defining a cocktail seems to be one of those “I know it when when I see it” situations. 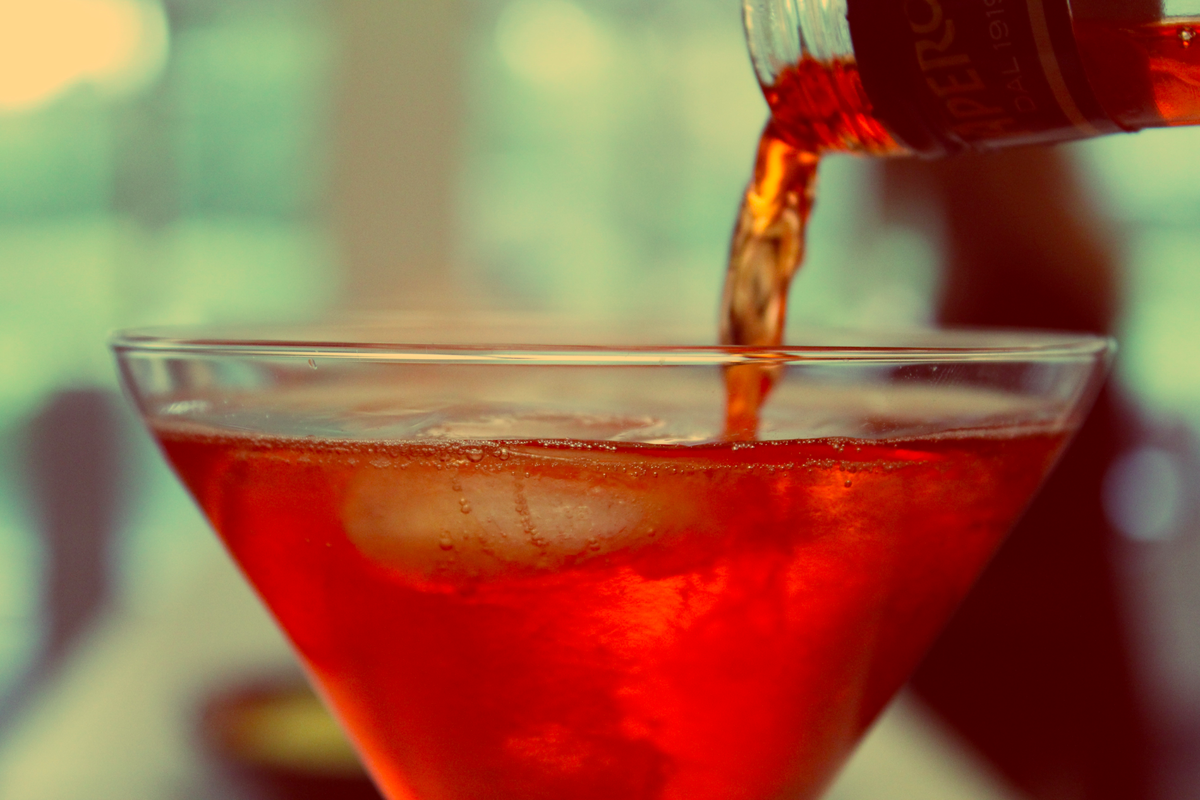 A number of the patrons admitted they had no idea what was in their drink. “The menu confused me a bit,” one drinker said. Another woman said she wasn’t sure what all of the ingredients in her cocktail were, but that this was a plus. “It’s good to try something new,” she said.

This may seem pretentious, but it doesn’t feel that way when you talk to the bartenders. Rye manager and bartender Vincent Toscano can explain the purpose of every ingredient and how the drinks plays off the flavors in a particular classic.

Toscano and the staff are also deeply aware of the mixed drink’s origins. “Making cocktails in [San Francisco] makes us feel extremely connected with our history,” said Toscano. “Since the time of the Gold Rush, San Francisco has been a hub for people trying to be different.”

Perhaps because the menu can be so baffling to the novice drinker, the most popular cocktails at Rye are the most recognizable ones. The following chart displays how many of each of the cocktails on Rye’s menu was purchased on the night of October 14, 2016. All of the drinks are concocted and named by the current staff—we have added the name of the most similar classic drink in parentheses. 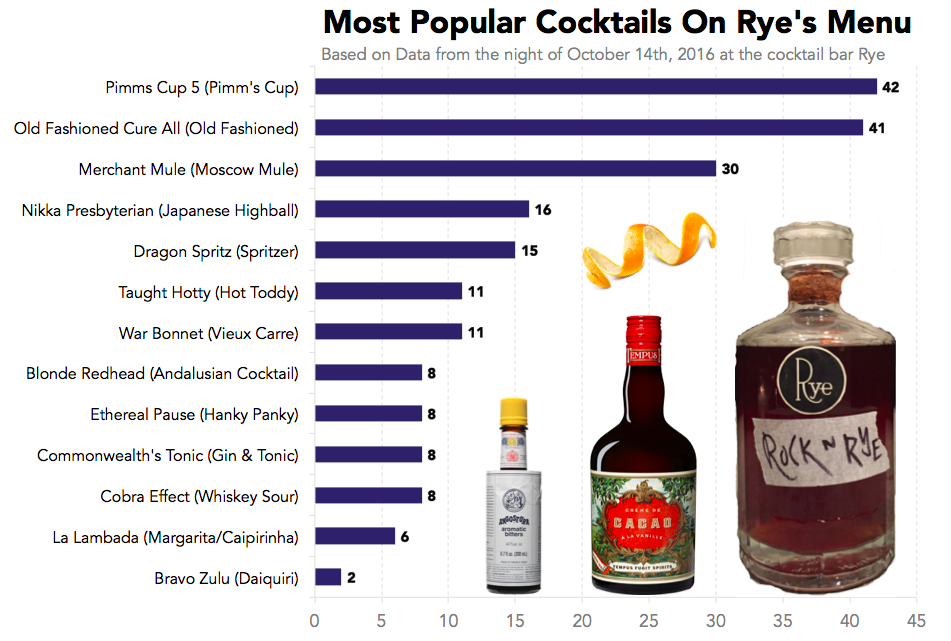 The most popular cocktail of the night was the Pimm’s Cup #5. The Pimm’s Cup—a mixed drink containing a liquor, fruit juices and spices—was developed by James Pimm for his London restaurants in the 1840s, and is not particularly common in the United States. Toscano explains that Rye makes its own Pimm’s concoction, and it has become their most well known drink. (This is corroborated by Yelp comments.)

The second most popular drink that evening was their play on an old fashioned. Don Draper’s love of the drink likely accounts for some of the drink’s prominence today. But the centrality of the drink goes beyond its place in Mad Men.

According Gary Regan’s The Joy of Mixology, a drink made with sugar and bitters muddled together, and then combined with straight or rye whiskey and a lemon twist, was already considered the “old fashioned” way of making a drink in 1895. And thus the drink acquired its name.

We asked one Rye patron with an old fashioned why he thought the drink was so popular. “It’s a way to perform nostalgia,” he theorized. “In our generation, after the economic crisis, there is an idea that things used to be better. Aesthetically, you saw that a lot in fashion and the resurgence in a lot of trends and styles that were associated with a certain era.” Basically, old fashioneds are a way to make cocktails great again.

The entire experience of the modern cocktail bar is colored by sentimentality. Many cocktail bars are modeled after 1920s speakeasies—hidden in basements with front doors that have no signs, with heavy dark wood panelling. The bartenders dress in a sort of prohibition era chic and have an old school charm. When one of the bartenders checked in for his shift at Rye, we overheard another joke that he looked ready for a “Charles Dickens festival”.

Yet the experience is incredibly modern. Yes, the drinks on Rye’s menus are nods to the past. But they are also influenced by globalization, the foodie movement, and the sensibilities of their current clientele: mostly cosmopolitan twenty and thirty somethings. “As soon as I started having some disposable income, I wanted finer drinks,” says a customer in his late 20s drinking a classic old fashioned.

“A proper drink at the right time—one mixed with care and skill and served in a true spirit of hospitality,” writes cocktail historian David Wondrich, “is better than any other made thing at giving us the illusion, at least, that we’re getting what we want from life.”

The resurgence of cocktails is a return to an American tradition. And given the current mood of the country, a lot of Americans may enter bars like Rye in search of the illusion that they’re getting what they want from life.

This article originally appeared at: https://priceonomics.com/what-do-people-order-at-cocktail-bars/